The unique gastronomy of Sardinia and gastrotourismSardinia is one of the two largest Italian islands, which is located west of mainland Italy, in the center of the Mediterranean Sea. Unlike its closest neighbor, the French island… 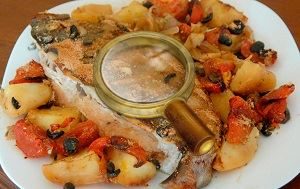 Poisoning tourists in Egypt happens very often. This problem is much larger than it seems. Firstly, most vacationers are treated independently, which makes it impossible to collect at least some statistics. Secondly, alcohol is often mistakenly considered the cause of stomach upsets. As a result, this “acute” problem is underestimated by many. In this article we will give some tips – how not to poison yourself in Egypt. Unfortunately, any such advice only reduces the likelihood of poisoning, but does not completely exclude it. Most importantly, you need to know. All products in Egypt are grown in the Nile Valley, where the soil has always been very fertile. This was due to the silt that the river brought every year. In 1970, a dam and power station were built in the city of Aswan, and silt ceased to flow into the fields. But the yield did not decrease, but only increased. Why? The answer is obvious – mineral fertilizers. According to statistics, 575.4 kilograms of mineral fertilizers per hectare of arable land are used in Egypt (see statistics). For comparison, in Russia we use an average of 15.7 kilograms. That is, the Egyptians add 36.6 times more nitrates, pesticides and phosphates to the soil than they do in our agriculture. Even the word “fertilizer” is difficult to use in this case. Fertilizing is adding something to the soil to improve it. The Egyptians do not fertilize the soil, they form it from mineral fertilizers. If you look at the statistics of imports of the Republic of Egypt, it turns out that most of all they import electronics and technical equipment (6.9 billion dollars a year). This is logical, since Egypt is technically very far behind. In second place are products of the chemical industry – those same mineral fertilizers ($ 4.2 billion per year). According to the consumption of mineral fertilizers per unit of arable land, Egypt ranks 14th in the world. If you look at this list, then in front of Egypt are small countries – Qatar, Singapore, Hong Kong, Trinidad and Tabago and the like. If these “kids” are removed from the list, then Egypt will be in 5th place after New Zealand, Colombia, China and the United Arab Emirates.

By the way, pay attention to the statistics. New Zealand, in the minds of Russians, is associated with good ecology, and the products from there are considered almost the most useful. In fact, the volume of use of mineral fertilizers in New Zealand “rolls over” and exceeds the Egyptian by three times. Many tourists notice that vegetables in Egypt are tasteless. This is logical. Vegetables quickly sprout and ripen under “pesticidal doping” and simply do not have time to gain taste, sugar and vitamins. Remember the main fact: when you put a tomato in your mouth in Egypt, it will do more harm to your body than good. What are the safest foods in Egypt? In first place in terms of safety in Egypt is fish. The Egyptians catch fish in the Mediterranean Sea, and it is completely environmentally friendly. In second place is meat. Of course, animal feed is grown in the Nile Valley, on the same nitrates, pesticides and phosphates. But the animal has already processed them, and the meat is safer than plant foods. In third place are dairy products. On the fourth, cereals and products from them – bread, rolls, cereals. The fifth place is occupied by legumes – peas, lentils and beans. Close the list of fruits and vegetables. It is they who “draw” from the soil the most harmful substances and supply your body. Findings. Lean on fish and meat, beware of vegetables and fruits. Rule of 6 hours Products deteriorate from the fact that bacteria multiply in them. Over time, there are more and more dangerous microorganisms in food, and food becomes unfit for consumption. These microorganisms cause most poisoning. Egypt is a hot country, therefore, bacteria multiply here faster. Remember that if the food has not yet acquired a characteristic smell, this does not mean that it is safe. Food may look quite normal and smell good, but it can already be poisoned. In Egypt, many tourists take food from a restaurant to their room or pool, and then forget about it. Here the Russians summarize the principle: “food cannot be thrown away,” which many of us have been vaccinated since childhood. If 6 hours have passed since the preparation of the food, then you can throw it out and NEED! At this point, almost all food in a hot climate becomes dangerous to eat. Another good tip is to generously pepper the food before eating. Unfortunately, this method is not suitable for all tourists, since not everyone likes spicy food. Just don’t rely on the pepper that lies on the tables in the restaurant in the hotel, this pepper has long been “exhausted”.

Remember at dinner what happened for lunch. When in the kitchen in the hotel after dinner there are unclaimed products, of course, the Egyptians do not throw them away. They are used at the next meal. That is, what is left for lunch goes for dinner, what is left of dinner is used for breakfast, and so on.

About the varieties, motives and benefits of travelAccording to the Dictionary of the Russian Language of Sergei Ivanovich Ozhegov, travel is a trip or walking on foot to distant countries, places. Everything seems to be clear, but…