Rome – history and sights of the city 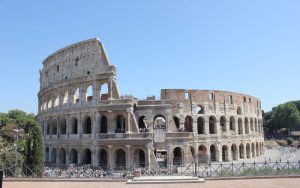 The city of Rome, the capital of Italy and the administrative center of the provinces of Rome and Lazio, is located on the Tiber River, 28 km from its confluence with the sea.

The population is about 2.8 million people. The city has metro and airports – the Leonardo da Vinci Fiumicino International Airport and the smaller Ciampino Airport. Economic and industrial priorities are the chemical, printing, furniture, pharmaceutical and food industries, as well as applied art and the film industry.

One of the city’s largest tourist attractions is the “State in the City,” the Vatican.

The cultural center is La Sapienza University (founded in 1303). There is an observatory, more than 100 departments, where they study fine art, theater, music and many other types of arts. In addition, the university has more than 155 libraries scattered throughout the city.

The Opera Roma Theater, Teatro Eliseo Theater and one of Rome’s oldest theaters, Valle (Teatro Valle, founded in 1727) regularly show excellent performances. In addition, the city on the Tiber offers one of the oldest conservatories in the world (founded in 1570). Masterpieces of Italian painting and sculpture await visitors at the Vatican Museums, and thanks to Villa Borghese, the Capitoline Museums on Capitol Hill, as well as many churches and palaces, the list of attractions can be continued for a long time. Art lovers will also visit the famous Roman National Museum (completed in 306). The National Gallery of Modern Art, the National Museum of Folk Art and Traditions welcome many visitors.

Rome is one of the oldest cities in the world and therefore is known as the “Eternal City”. According to legend, it was on seven hills by the brothers Romulus and Remus in 753 BC. However, archaeological finds have shown that there are already about 1500 BC. settlements were. Rome was the largest and most populous city of antiquity (up to 2 million inhabitants in the imperial era).

With the transfer of the capital and residence of the emperor of the Roman Empire to Constantinople (330 AD), Rome lost its political significance. The decline began with some attacks by barbarian tribes (the looting of Rome by the Visigoths near Alaric in 410, the second looting of the vandals near Geiseric 455, the violent overthrow of the emperor of the Western Roman Empire by 476 Odozer and his troops). The Ostrogoths later conquered Rome. In 552, Rome was conquered for the last time and again belonged to the Eastern Roman Empire. In 756, a papal state arose in the city – the lands were donated by the bishop of Rome. This state was under the political rule of the pope and was the religious center of Europe.

Pope Leo III, who solemnly crowned the emperor Charlemagne in Rome, emphasized the succession of the papal state within the Roman Empire, but in the following centuries there was a constant struggle between the popes and emperors for power in the city and the right to appoint the clergy (investment dispute). In 1084, the Normans, called up by the pope against the German king Henry IV, again plundered the city under the command of Giscard.

New buildings were built on the ruins of old buildings. Where ancient temples used to be, churches were often built. At that time, a group of citizens of Rome tried to create a republican government, as in other Italian cities (the uprising of 1143, in which Arnold Brescia was involved, the proclamation of the republic according to the ancient Roman model of Cola di Rienzo in 1347). During the time of the Avignon papacy (c. 1335-1430) the influence of the popes weakened.

Inside the city, power belonged primarily to the wealthy and influential noble families of Savelli, Annibaldi, Segni, Orsini and Colonna. The so-called “popes of the Renaissance”, Martin V, Nicholas V, Sixtus IV, Pius II, Julius II and Leo X, came up with city landscapes with numerous churches (including the famous St. Peter’s Cathedrals) and palaces, took care of the development of streets and promotion great artists and architects.

In 1527, after the defeat of Rome by the troops of Emperor Charles V, the looting caused serious damage to the city. Many artistic treasures were taken out of the city, and epidemics erupted during an uncontrolled situation. Pope Sixtus V. (possession: 1585-1590) built many new buildings. For this, he often ordered the architect Domenico Fontana. This architect developed one of the best plans in Europe for the development of the city of Rome, but this was not implemented to the end.

Mountain tourismMountain tourism is a fairly extensive category of outdoor activities. It includes trips to highlands, rock climbing, caving, rafting on mountain rivers, geological explorations, expeditions to familiarize yourself with the…