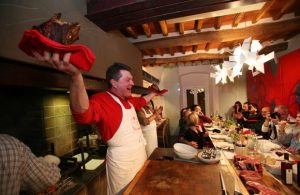 Gastronomic tourism is a trip to various places of the planet to get acquainted with local culinary traditions and features of national or regional cuisine. The main goal of vacationers who choose gastronomic tourism is to taste unique products and dishes that are unique to the area.

For true gourmets, such trips are not a way to fill the stomach with all kinds of delicacies and exotic dishes. First of all, gastronomic tourism is a means of understanding the mentality, centuries-old traditions and national spirit of peoples through the culture of cooking and eating food. Thus, gastronomic tourism is more than a regular sightseeing trip, as it requires a careful approach to the selection of local food. The main highlight of the gastrotour is the tasting of those dishes that are not found anywhere else in the world.

Rural and urban gastronomic tourism
Gastronomic tourism is usually divided into two types – rural and urban. Rural culinary trips are also called “green”, because often they involve trips to ecologically clean places of the planet. Here, vacationers taste uncontaminated products grown without the use of chemistry. Often “green” gastronomic tourism provides for the independent collection of wild forest berries, fruits and vegetables on farms and tours of places famous for winemaking. City gastrotours involve visiting restaurants of national cuisine, confectionery factories, workshops for the production of sausages and other products with its obligatory tasting.

Gastrotourism is also popular, suggesting an acquaintance with the same dish or drink prepared in different countries and regions. A typical example is wine tours in Europe, in which the same brand of sunny drink can vary significantly in taste. Modern tour operators in a considerable assortment offer cheese trips to the leading producing countries of this product – Italy, Switzerland and the Netherlands, as well as beer tours with visits to Belgium, the Czech Republic, Austria and Germany. Such trips are often organized for various festivals dedicated to food and drinks.

Popular destinations for gastrotourism
The most popular world tourism destinations are Europe (France, Montenegro, Italy), Thailand, India, the Hawaiian Islands, California and Arab countries, in particular Morocco. Culinary tourism received special development in Japan, where, under the guidance of an experienced guide, tourists independently buy seafood necessary for sushi, and the dish is prepared before their eyes. In the same country, the most daring tourists seek to try the famous puffer – a dish of the same name fish, in the liver of which contains a volume of poison that can cause the death of 30-40 people. Fugu is prepared only by experienced chefs with a special license. Gastrotourism is less extreme in European countries, for example, Italy, where gourmets are offered to try dozens of types of pasta prepared according to various recipes.

In Ukraine, culinary tourism has not yet become widespread, but this type of travel is developing dynamically. Mainly, it is represented by wine routes and green gastrotourism. The indisputable center of wine tourism is the southern coast of Crimea. Wine tours usually include a visit to the Novyi Svit champagne factory, the famous Massandra and other wineries with product tastings. The center of “green” gastrotourism in Ukraine is its western regions, in particular, Transcarpathia. Already now tour operators offer Ukrainian, Gypsy, German, Slovak and Hungarian culinary trips in this region, during which you can not only try, but also learn how to cook unusual dishes. In the Carpathian region, which is one of the centers of winemaking in Ukraine, wine tourist routes are dynamically developing.

City gastronomic tour is different from rural. In the city, food is more refined and pretentious, in provincial towns it is simpler. In the city, every famous dish also has the handwriting of the cook who prepared it. It is unlikely that it will be possible to bypass famous institutions, because the plans are to try high-quality food, cooked with feeling and virtuosity. If in a rural gastronomic tour you can participate in the preparation of dishes yourself, under the guidance of local magicians, learn recipes, the specifics of products, then in a city tour you will only have the role of a client.

It is worth paying attention to the fact that there is not only a common national cuisine, but also, often, local urban cuisine. They differ among themselves. For example, in Rome there are purely Roman restaurants that offer you to taste exactly Roman dishes. For example, panzerotti alla romana (cheese and ham pies) or scampi romani (Roman lobsters).